Why the Karoo is the Place to Be 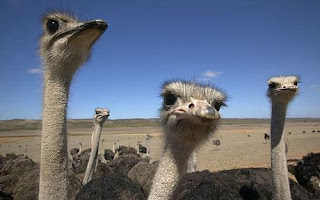 I hate Hermann Niebuhr. It's late afternoon – magic hour – in the Klein Karoo, a fertile valley in South Africa's Groot Karoo desert, and I'm sipping a sweet muscatel on the veranda of Boesmanskop farm guesthouse cursing my old university friend.

In front of me, vineyards of plump merlot and gardens of agapanthus stretch to the fertile foothills of the Swartberg Mountains, while in the southern distance the giant Outeniqua peaks that barricade the desert from the ocean are a kaleidoscope of red and purple in the fading brilliance of the sun.

It was Niebuhr who suggested I visit Boesmanskop. "The Gardens of Versailles in the Desert," he called it. And he was right. It's also Niebuhr who, over the years, has introduced me to the wine farms and pretty towns on the Klein Karoo's R62 road. "Like Route 66 – but with better characters," he raved. And he had a point there, too.

But, most annoying of all, it was Niebuhr who, a decade ago – when the rest of us thought the Karoo was a desolate backwater of conservative Afrikaners best driven through at high speed on the way to the Cape coast – bought a tin-roof Karoo shack in which to live and paint the region's desert landscapes and rusty windmills. Today his property is worth 50 times what he paid for it, his paintings fetch five-figure sums, and the R62 is the coolest alternative to the famous coastal Garden Route.

A sprawling semi-desert covering 150,000 sq miles of the Cape province, the Karoo has long been thought good for three things: sheep, ostriches and tumbleweed. Boer farmers first settled the desert in the mid‑1700s, but for the next two centuries little changed. Until now. Artist pioneers like Hermann led the way, but recently hoteliers, restaurateurs and creative urbanites tired of South Africa's cities have been moving in to open galleries and guesthouses, or turning those sheep farms into safari lodges. The ostrich business is booming again, thanks to the current taste for leaner meats. The Karoo is South Africa's hip new tourism frontier.

My latest visit involved a week-long drive from Cape Town. I would spend three days in the Klein Karoo exploring the towns and mountain passes on the R62, a former ox‑wagon trail running 300 miles through the valley basin; and then move to a new safari lodge in the vast expanse of the Groot Karoo. Niebuhr wasn't with me, but he suggested places to see and people to meet.

Barrydale, a serene hamlet 100 miles east of Cape Town, is the gateway to the Klein Karoo, and I spent my first night there, recharging for the drive ahead. Once a typically conservative Karoo dorp, or small town, it's now a stylish destination for weekending Capetonians, best experienced at The Barrydale, the formerly decrepit Victorian hotel on its main street, now reincarnated as a 14-room, art-filled gem by a flamboyant Afrikaner antiques dealer.

For me though, the real Karoo starts east of here. The R62 flattens out, sand and scrub roll to the horizon, and the sky becomes big and glassy. It's hard to believe that the lush forests and crashing waves of the Garden Route are only 50 miles to the south.

And yet, hemmed in by mountains and replenished by spring water, the Klein Karoo is a ribbon of fruit farms, and in less than two hours I'm decanted in Calitzdorp – the Port Wine Capital of South Africa – a dusty village of gabled Cape Dutch houses rimmed by vineyards. There are five port wine cellars in town and I joined a tasting at Boplaas, established in 1880. The Karoo's climate makes for sweeter grapes than Stellenbosch, and the Cape Juby and Tawny ports here are as good as any I've had from Portugal.

Keeping with a theme, I spent the night at the Port Wine Guesthouse, a handsome thatched 1830s Cape Dutch farmstead in town, and motored on to Oudsthoorn, 30 miles east, the following morning.

The largest town in the Klein Karoo, Oudtshoorn is famous for the Cango Caves (miles of natural limestone tunnels) and its ostrich farms. In the late 19th and early 20th centuries, local merchants grew wildly rich exporting ostrich plumes to the great fashion houses of Europe. They then built huge Edwardian mansions with the proceeds – the so-called "feather palaces". Most fell into decline when the bubble burst, but many are being restored by the new pioneers.

Montague House, a handsome 1908-built sandstone palace with a polished oak‑panelled interior, is now a bistro and ostrich leather boutique; and The Feather Palace, a red-roof mansion on a dairy farm a little farther down the R62, has been turned into a stylish working guest ranch.

In the lush foothills of the Swartberg, barely 15 miles outside Oudtshoorn, I tracked down Boesmanskop, a two-room inn unveiled in 2006 by local farmer, Tienie Bekker. A soft-spoken Boer whose ancestors were among the first to settle the Karoo in the 1750s, Tienie inherited a struggling grape, tobacco and ostrich farm in 1982. He has transformed it, planting gardens on the front lawn and furnishing the family farmhouse with Victorian and Cape Dutch antiques, and designing two guest rooms in "Cape Country Afrikaner" style. My room had yellow wood floors, a claw-foot bathtub, and stunning views of the vineyards.

After cursing Niebuhr over that sunset muscatel, I shelved my envy in favour of a dinner of lamb chops and fig pie, whisked up using ingredients from the farm. Next morning came the bill: the equivalent of £15 for the night, food included. I offered to pay more. "Agh, no," Tinie protested. "It's really just a side‑business to my farm."

Oudtshoorn is the Klein Karoo capital, but Prince Albert, which lies the other side of the Swartberg, is the gateway to the Great Karoo and its aesthetic heart. To get to it I left the R62 and took the Swartberg Pass, one of the world's most majestic mountain passes: a 17‑mile-long, heart-in-mouth miracle of cliff-edge engineering built in the 1860s. At the top you're 3,280ft above sea level, the desert stretches away below, and all around are giant slabs of red sandstone that seem to colour the sky. And then, as if to soothe your frayed nerves, the road twists gently down the other side, leaving you in the most serene flower-filled town in the Karoo.

Named after Queen Victoria's consort in 1854, Prince Albert was the biggest fruit-producing district in the Cape during the 19th century. But, like many Karoo towns, its remote location meant it later slipped into obscurity, sheep and ostriches replacing grapes and apricots. Today, though, that isolation has served it well. Its streets are lined with beautifully preserved Victorian houses, many of them National Monuments owned and restored by artists and designers who have escaped the city.

It's not only the houses that are being bought up. Fruit farming has returned to the valley. I did a tasting at Bergwater Vineyards where a former airline pilot makes a sublime Shiraz Reserve; sampled meaty manzanilla olives at Swartrivier, a thriving olive farm; and bought dried fruit, olive oil, almonds and cheeses at various farm stalls in town.

You can take the Montague Pass over the Outeniquas from here and be on the Garden Route in 90 minutes, but I had one more stop, and it lay five hours east in the sweltering eastern expanse of the Groot Karoo. And here was the real desert: an arrow-straight road stretched to the horizon, tumbleweed rolled past, vultures picked at roadside carrion.

But an extraordinary thing is happening: investors are buying up its struggling sheep farms and restocking the land with wild game; there are now dozens of tourist safari lodges in the Karoo.

I arrived at the most exclusive at sunset: Samara Private Game Reserve, set in 70,000 acres beneath scrub-covered mountains, 30 miles south of the historic colonial town of Graaff-Reinet. It accommodates just 12 people and its centrepiece is not a typical wood-and-thatch safari lodge, but a gorgeous 1800s Karoo farmhouse with veranda and corrugated-iron roof. Its interiors have been beautifully restored, and zebra print rugs and cowhide sofas furnish the living room.

The area's true highlight, though, was a game drive into the mountains on my last morning. It took us an hour to get to the top in the Jeep, and I expected to find more scrub and sand. Instead, the Karoo revealed another face, an entirely different habitat from the desert below: the top was a lush green plateau stretching for miles, so similar to the Serengeti that for a minute I thought I was hallucinating. Herds of mountain zebra, eland, gazelle – and even some cheetah – roamed the pastures.

We drove to the edge of the escarpment and walked to a cliff-edge promontory with a breathtaking view of the plains below. Somewhere beyond the horizon, not visible through the haze, were the Indian Ocean and the Garden Route. As I sat there I tried to picture what lay ahead: the gorgeous beaches of Plettenberg Bay; the oysters, lagoon, and evergreen forests of Knysna. But it was no use. Instead, lulled by the dreamy silence and the heat of the sun baking the rocks, I fell fast asleep. The Karoo does that to you. It clears the clutter in your head.

Posted by shannon walbran at 9:39 AM