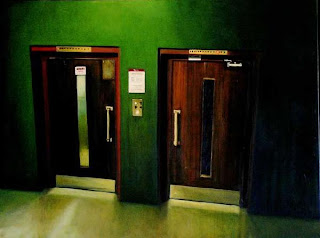 Voyeur in the foyer

Hermann Niebuhr's latest paintings seduce and intrigue. Like the city of Johannesburg that inspired them, his Nightshift series, on show from March 5-29 at The Canopy, shows the Hillbrow that has transformed from Manhattan-like aspirations of the 1970s, when it reached a pinnacle of cosmopolitan chic, to the chaos and decay of today.

The exhibition marks the launch of a new complex at 81 De Korte Street, Braamfontein, an appropriate setting for Niebuhr's themes. The building is owned by American art historian Carlyn Zehner and consists of The Canopy, a dramatic multipurpose space with floor-to-ceiling windows, and the Narina Trogon restaurant (it's named after a colourful tropical bird), which opens on March 10.

"There is so much talent in this country and I was determined to reflect that in every aspect of this restaurant," says Zehner.

Niebuhr (35), a landscape painter, was based in the Karoo before moving back to Jo'burg in 2002. These new works, priced from R25 000, start off where his previous series, Night Ride Home, left off. He still creates landscapes but now they are of the city.

The paintings depict the foyers of Hillbrow flats. Stark and provocative, they encourage you to look a little deeper and even make you want to venture inside. But a strange silence resonates from them. They show the quiet mystery of the city's witching hour - 3 am - when security guards (though neither they nor other people feature) pass the hours watching over sleeping flat-dwellers.

"I painted them from photographs I took of the concierges late at night," says Niebuhr. "They are seductive, they resonate and glow, but they also make you apprehensive because the subject is bleak."

All the symbolic props of a security guard's world are in these paintings, evoking loneliness and austerity. It is tempting to call them "photorealist", but that wouldn't be quite appropriate. Instead, says Niebuhr, "I'm having a conversation with Guy Tillim. It's a painter's discourse with a photographer." (Tillim's book, Jo'burg, shows the city from many angles.)

"The city is transforming and I'm trying to document that transformation," he adds. "Hillbrow was intended to be something else, but now that project is failing. However, I'm not looking at it as if to say: What a stuff up!' I'm examining its changing face."

Niebuhr's own transformation, as a South African and artist, also informs these works. He grew up in Sandton and says: "It was a typical suburban existence, largely oblivious to the political realities of the country."
Posted by shannon walbran at 9:59 AM No comments: 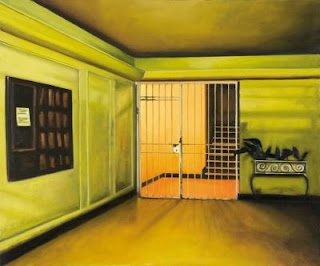 Shifting the Edges of the Night

No relief to be taken from the possibilities of the street.

This night is a working night in an enclosed interior, a capsule of enforced solitariness.

The odd late-night trawler stumbles home. Half falls asleep while waiting for the lift. Shiftworkers come and go. Momentary distractions in this long, drawn-out stretch of bald, blank reality.

This night is devoid of romantic depictions of the nocturnal city as playground for hidden desires. It is a night unadorned with fancy, naked only in a forlorn kind of a way. 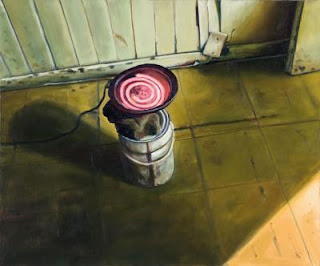 Cheap, red warmth from the thin wires of a plug-in heater and a hand-me-down tartan blanket. Awake and alive and still awake, while others slumber through this interminable dead-end night. Radio talk shows, a ticking clock, and police sirens in the distant darkness.

This is the long wait til dawn.

Read more »
Posted by shannon walbran at 4:06 PM No comments: