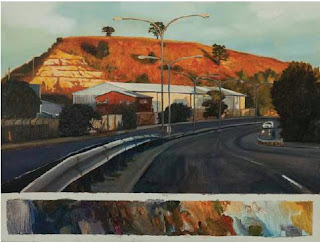 How much more gripping then to a painter's sensibility than the line that follows, "…shadows hold their breath…" And shadows, of course, breathe light. (Remember what Picasso said about Matisse? It was something to the effect that Matisse was a great painter because he had such great lungs.) To think of breathing shadows is to think again in terms of the living organism: 'shadow' not so much as blot but as entity. Shadows breathing in the world, is a great thought but it is, I think, a shift to a whole other level of greatness to think of shadows holding their breath. We hold our breath so as either not to drown, or not to disturb, not to disturb, perhaps, some fine and delicate condition – a condition of things so fine as to be vulnerable to respiration.

This evocation by Dickinson of the potent alchemy of an angle of light, the listening landscape and the suspenseful dark provides a useful backdrop to a few general remarks that I wish to make on Hermann's new work.

The work strikes me as moody. It is a moodiness conjured by the slants of light, it's occasional almost syrupy lividity, its glower and weight: by the bristling animation of the painted surface, a kind of listening: and, by those suspenseful darks. A moodiness conjured also by a pervasive sense of the "low-slung," - I can find no better way to say this. There is a kind of hip-level pivot to the compositions. Even if only by implication rather than by design, what is above is larger than what is below and what is below seems to either slink or stretch and in either pose, bake in the enormous light. This hip-like, low slung quality is true even when he stacks two or three strips atop on another, perhaps even more so actually.

I think a case could be made that despite an allusion to history, cultural and industrial, despite the occasional injection of 'foreign" symbolic elements, a camera, a nude, a rabbit, despite a lone figure or an illusive tableau, that the narrative in these paintings, and I suspect that there is one, lies not in these almost literary elements, but lies, rather, in the mood.

This body of work is also, by and large, the most overtly painterly that I have seen from Hermann's studio. Brushiness aside, in this new work he has, conceptually, frequently ruffled the picture surface to seek out an egregiously painted event. Some of the conscious decisions were a) to counterpoint image with strips of random paint daubs, a sort of palette confession; b) to leave the stretched rectangle or circle of the canvas incomplete, the image left hanging within it or swathed across it: c) to allow lots of drips, a kind of process confession: d) to hang a washing line of colour over a dark and skeletal scene, itself bleached of colour.

And this brings me to my favourite group in this new body of work, those bleached of natural light and steeped in an almost spectral dark. There is, for me, evident in these five paintings a quite unique vision. In each case the 'scene' is transformed by the painters eye and hand into large a complex metaphor. By further eradicating elements of the pictorial he has released a potent painterly image. The vision is authoritative, the range of paint handling is exquisite, the blacks keenly drawn, the whites creamily real, the tableau of figures with a donkey fluid enough to hover in the realm of imminence, the city is dark enough to be Gotham, yet recognizable as home. And why would one of them be a rondo - round like the eye piece of a microscope, round like the lid of a Petri-dish?

Another question comes to mind, when looking at Hermann's work are we sharing in a glance or a gaze?

We may see and describe Hermann's works as landscapes, on the other hand listening to Dickinson and looking at his work we may go a little further and not merely see the paintings as landscapes but, more excitingly, we may see the landscape as painting.

Ricky Burnett, despite lengthy sojourns in Britain and the United States, has been active in the art world in South Africa for many years, as a teacher, writer, curator (Tributaries, the Jackson Hlungwani retrospective and Newtown Galleries) and now as a practicing artist. He has a private teaching studio in Johannesburg.

Posted by shannon walbran at 11:04 AM